In late August, I loaded my frame with a beautiful Judy Niemeyer Glacier Star quilt, pieced by Leslie Kiger of St. Simons Island, Georgia. You may remember my trip to Louisiana in March, and my visit to the Gulf States Quilt Association show in Slidell while we were traveling for Dennis's consulting work. Well, Leslie had a magnificent quilt in that show, and I blogged about the show here (you can see Leslie's navy quilt, from Laundry Basket Quilts "Eldon" pattern in two of my pictures), as well as featuring it prominently on my Facebook page. To be polite, I sent Leslie a note via Facebook Messenger just to let her know how much I'd enjoyed her quilt, and to ensure she knew I'd posted a couple of pictures of her quilt hanging in the show. I would hate for someone to pin a picture of one of my quilts, without crediting me, and I hoped she would realize I wasn't trying to take credit for her work.

To my surprise and delight, Leslie contacted me soon afterwards to ask me if I'd be willing to quilt a Glacier Star for her. Honestly, I was afraid I'd bitten off more than I could chew when I told her that I would. I'm a longtime quilter, but have only done this longarm business for a little more than a year, so most of my work is computerized edge to edge. But it seemed like a great opportunity, so I said yes. Leslie worked out a time on my calendar that coincided with her schedule, and she shipped it to me to finish for an entry in the Hattiesburg, Mississippi quilt show October 3-5, 2014.For more information, go to the Pine Belt Quilters website.

I spent a couple of days basting the quilt along all the curvy edges, and getting it square in my frame. It finishes 90" x 90" in the queen-size version of the Glacier Star, so I wanted to make sure nothing was going to shift around. I quilt on a fairly small machine (only 18" throat) for a longarmer, so I knew I was going to have to turn the quilt numerous times, plus there would be a LOT of rolling.

I stared at that quilt in my frame for three or four days. I was PETRIFIED to get started. Finally, I just buckled down and quilted the center star. Success! 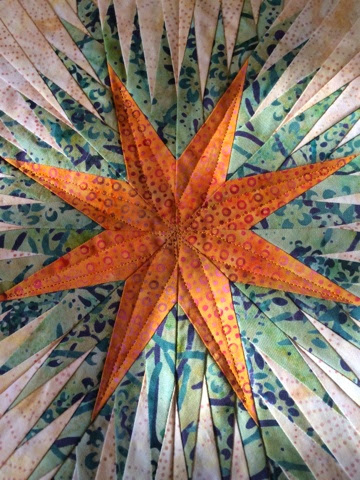 Then, I stared at it for a couple more days. Finally, in desperation, I posted a question to the Professional Long Arm Quilters group I participate in on Facebook, and learned that there were several designers who had digitized patterns that fit the sections of the Glacier Star. I decided to invest in the digitized design by Laurie Thomas at It's A Quilt Thing. It was a great decision. Laurie was a load of help. My machine's software isn't as flexible as some machines, so she quickly helped me with a couple of questions on the fly, and gave me great support.

Once I started going with Laurie's designs, the thread really flowed. It was just a matter of taking it one step at a time. Here are feathers in the center diamonds: 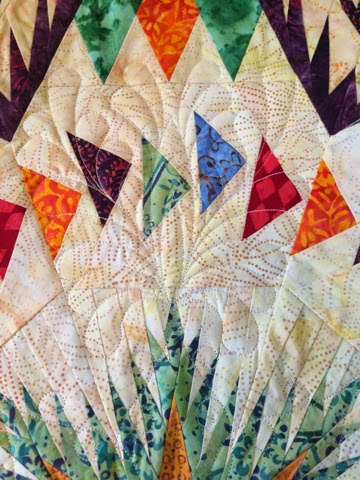 The middle after the feathers began taking shape: 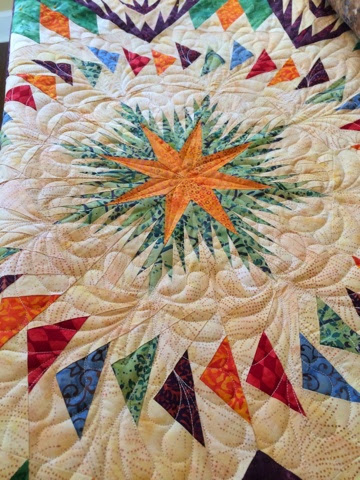 I liked the curly sections around the points. 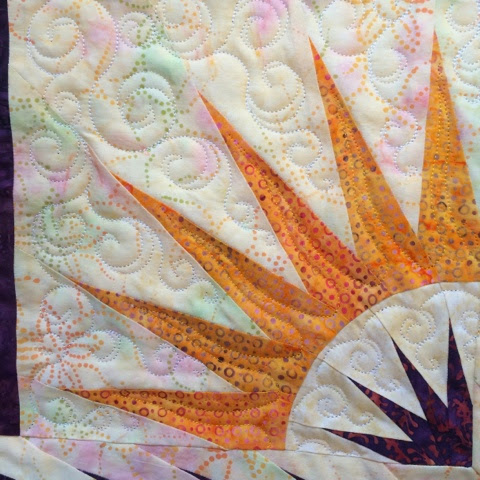 I absolutely loved the modern look to these traditional feathers. 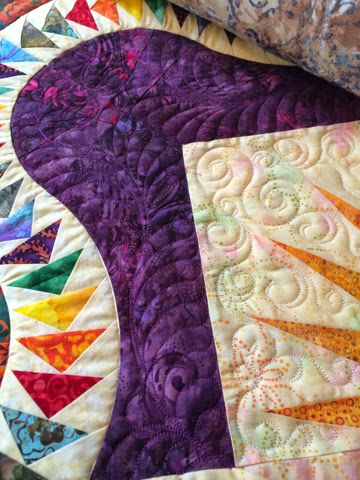 I was about halfway finished here, with 80% to go (sorry, old joke)...this quilt took me many hours every day. 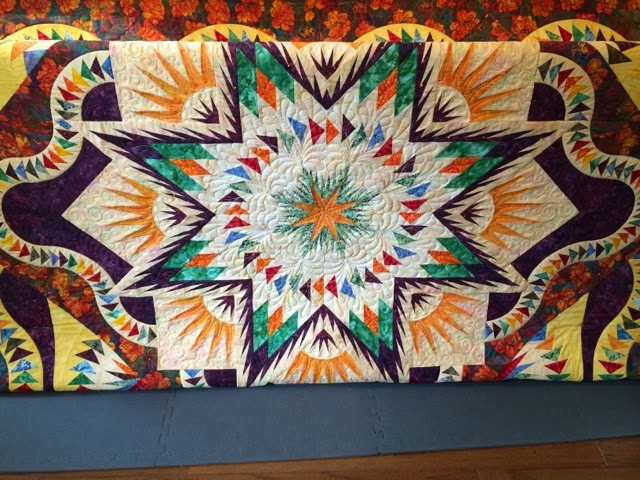 I loved the feathers on the curved flying geese. Leslie's piecing was so accurate! 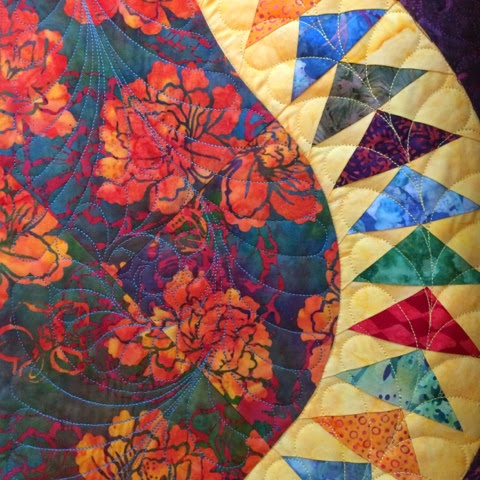 I agonized about this purple thread on the yellow section of the quilt. Leslie had requested that I not "quilt it to death" and that the thread match as much as possible. So, since this large area was treated as one feather in Laurie's design, should I use purple on yellow, or yellow on purple? In the end, I went with the purple...and decided it was a good choice. 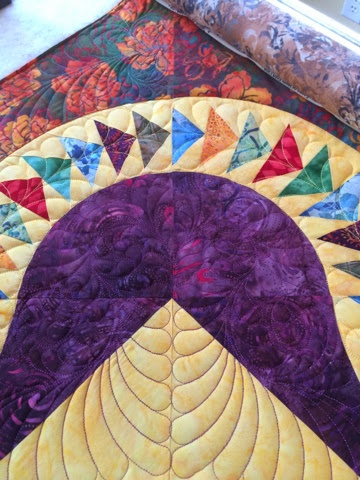 On the very last border, I had some placement issues. It wasn't the design's fault, and my machine was stitching well. It was just me, and the way I have to measure around those curves and get things placed "just so." Anyway, I wouldn't want anyone to think that this stuff just happens magically by a computer. I had to sew, swear, rip, sew again, swear louder, rip again, then sew ONE MORE TIME...but it finally came together. FYI, those pin holes from the needle go away pretty well with sizing and steam, and a clean toothbrush rubbed across the area. I think batiks are the worst about showing needle holes after ripping, due to their tight weave.

Also, as much as I *love* and adore Glide thread by Fil-Tec, it is a struggle to rip it when the tension is just right, especially after it's locked into batik cotton fabric. Slow and tedious unsewing! 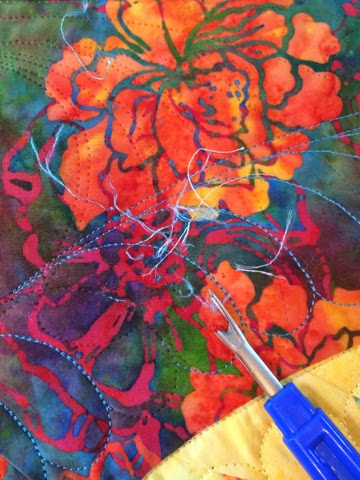 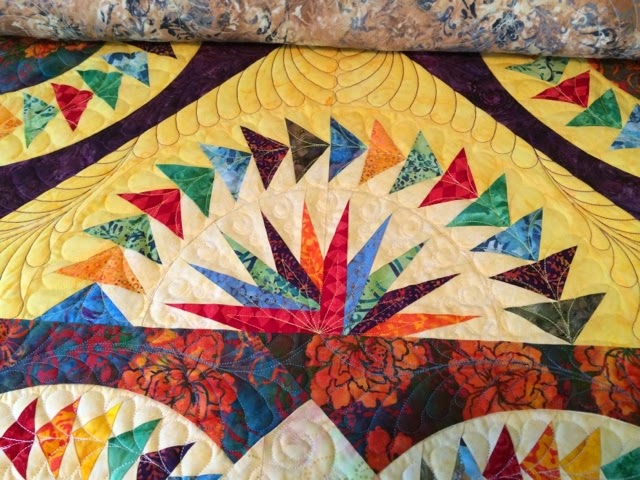 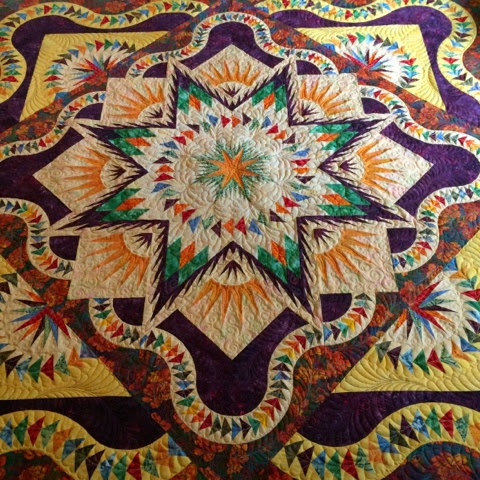 The backing fabric was initially a surprise to me. Leslie had such a vibrant quilt top, I was amazed she'd chosen a dull brown and grey backing fabric. But I was able to use gray or linen bobbin thread through most of the quilt with great success, and so the back ended up just lovely with texture. 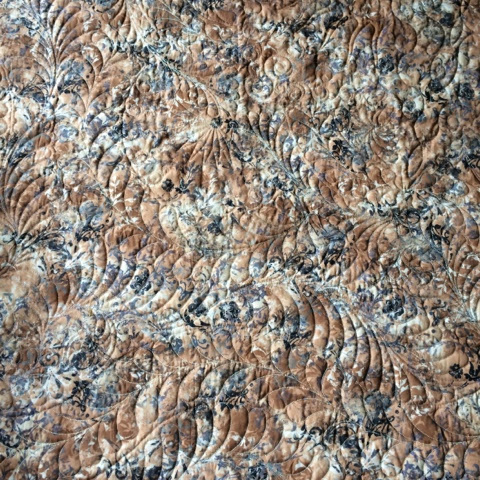 Here's a corner. I loved that color combo of Tidewater, Iris and Bone Glide thread. I also used Cornflower and Bright Gold Glide in the appropriate yellow spots. I even used just a touch of Sprout on those star tips. So many thread changes, so many times in and out of the frame...so much to learn. 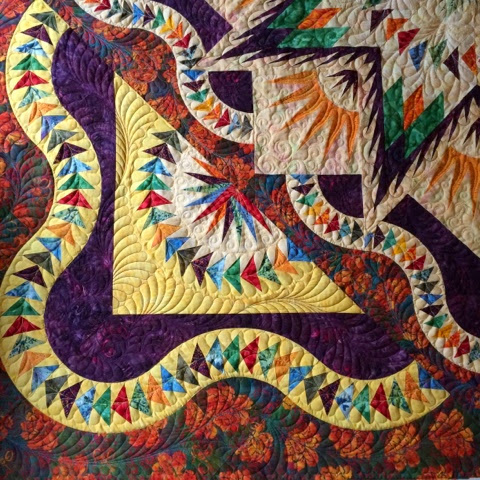 I'm looking forward to seeing pictures of this quilt hanging in the Pine Belt Quilters show next week. I have never had a show quilt before! I've always been so self-critical. Honestly, I was my own worst enemy on this quilt, too. I saw every flaw, and agonized over it. But when it was finished, I was pleased with the quilt's overall effect. Fortunately, Leslie was pleased as well.

The nicest part of the entire process was realizing that since Glacier Star is a paper-pieced pattern, and I have already invested in the digital pattern for quilting, I can make one of these "for my very own"! I think I'll put that on my schedule for next year. It's a gorgeous quilt, and it was a great learning experience for me.

LoriM
Married for 30+ years to my one and only love, I've worked professionally as a statistician most of my working life, while moving every three years as an USAF spouse. After spending years tutoring and home schooling my own daughters, I returned to the classroom, and taught middle school in an ideal situation in a classical Christian school. I have been quilting for 25 years, and find it is the perfect artistic complement to my mathematical mind. In 2012, I bought a longarm quilting system, and have my own business.